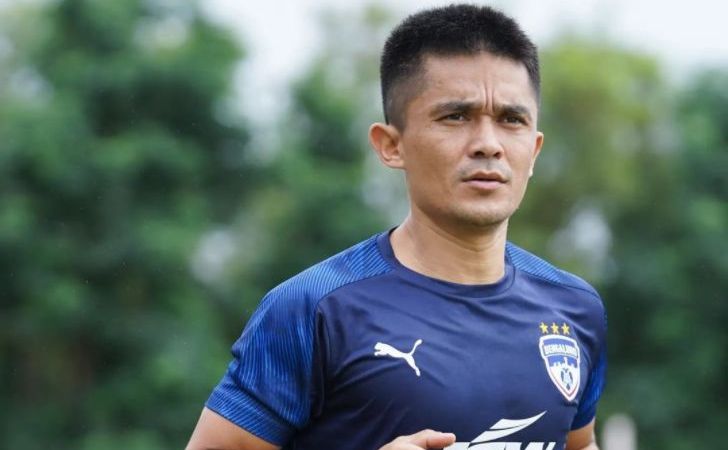 Sunil Chhetri is one of the best players to ever play for the Indian national football team. He has played for his national team for more than 15 years and currently plays for football club Bengaluru after being re-signed by the club in 2017. Chhetri has played for many Indian football clubs like Mumbai FC, East Bengal FC, Bengaluru FC, and the American football club Kansas City Wizards. Sunil is a versatile player who can play excellently even at the wing position and mainly as the central forward or striker. He has scored 80 international goals and assisted his teammates in many matches.

Chhetri is currently the second-highest active and fifth-highest international goal scorer, along with Argentine footballer Lionel Messi. Sunil has been rewarded with many prestigious awards like the Padma Shri award for his contribution to Indian football. Footballer Sunil is widely regarded as one of the best attackers in this sport due to his precise shooting, passing skills, leadership quality, and versatility during the game. This biography on Indian footballer Sunil Chhetri covers critical moments from his early life to date.

Named “The Asian icon” by the Asian football confederation, Sunil Chhetri was born to his father Kharga Bahadur Chhetri, and mother, Sushila Chhetri. Footballer Sunil’s grandparents and his mother were born in the neighboring country Nepal. Sunil was born to an ex-army father and a housewife mother in India called Secunderabad. Similarly, Sunil also has one sister whose name is Bandana Chhetri. Showing very good signs early, he would often play in the football ground with his school friends.

In his early playing days, he started to play for the Indian football club Mohun Bagan where he scored an impressive eight goals in eighteen appearances for the club. Chhetri played with number 9 on his jersey at Mohun Bagan AC, who currently wears the same number 11 at his present club Bengaluru FC. Likewise, he uses Chhetri as his name in his club and his national team kit during his career.

Indian footballer star Sunil Chhetri was born on 14-02-1992, making him 29 years old. (As per 2021) He follows Hinduism, and his Zodiac (horoscope) sign is Leo. As per his father, he spent most of his time playing football with the children in his neighborhood. Delighted by his talent, he was soon recruited into the Indian football club, Mohun Bagan. Since then, he has been playing excellently, making him one of the best footballers in Indian football history.

Chhetri has a medium-sized and fit body, and he stands 5.7 feet tall. Sunil has evenly matched weight for a professional footballer, as Sunil weighs around 154 pounds (70 kilograms) at normal. Sunil has dark brown color eyes and black color hair. Likewise, Chheri is very professional and takes very care of his body, training, and diet. Sunil has a chest span of 38 inches and a waist of 32 inches. Likewise, his athletic biceps measure 13 inches. Likewise, Sunil uses a shoe size of 9 (US).

Sunil Chhetri Salary and Net worth

According to different financial sources, Sunil Chhetri is worth around 1 million dollars to date. He has played for many Indian football clubs like Mumbai City FC, East Bengal, and Bengaluru FC, so a major part of his earnings constitutes Football Club salary and additional bonuses, endorsement, and sponsorship deals. He has made 125 appearances for his national team India after his debut in 2005. Sunil has also earned a significant salary playing for his national team.

Mohun Bagan AC signed him at an early age for three seasons, where Sunil earned a signing bonus and salary according to his contract. Likewise, he was again signed by other I-league football clubs like Mumbai City FC and Chirag United. Currently, Chhetri earns around 12,000 dollars per game played for his club. Sunil also has endorsement deals with the company like Puma and Axe. This amount makes This indian footballer one of the highest-paid Indian football players. He also owns multiple extraordinary cars in his collection, such as the Mercedes and Audi.

Who is Sunil Chhetri Wife?

Nicknames as “Captain Fantastic,” Chhetri follows Hinduism religion, and his Zodiac sign is Leo. Sunil also has a sister whose name is Bandana Chhetri. He is married to a woman he has known for a long time. Her name is Sonam Bhattacharya, and she is currently 30 years old. His wife is also his former club coach from Mohun Bagan AC. The lovely couple does not yet have any children.

The Indian footballer is also named “The Asian icon” by the Asian football confederation (AFC). Chhetri has a huge following on Instagram, Facebook, and Twitter. Sunil has an athletic body and being a professional footballer; he spends his significant time in the gym and training.

Indian footballer Sunil Chhetri plays forward for his national team and his current football club. His versatility, passing and dribbling qualities make him one of the best attackers in football. He has excellent dribbling and shooting skills. Sunil has won several major trophies like the I-league, Indian super league, and Indian federation cup, playing many big football clubs. He has played mostly as the striker and central forward and sometimes as a Left and Right winger in his professional football career. He currently wears a jersey with number 11 for his national team and the club.

Sunil Chhetri is one of the precise finishers and visionary footballers renowned for his outstanding international football career. He is currently the second-highest active and fifth-highest international goal scorer and Argentine footballer Lionel Messi. Chhetri has played 125 times for the Indian national team and has scored 80 goals in return. Chhetri had scored his first international goal for his national team in 2005 when he was playing against Pakistan national football team.

Sunil Chhetri is also quite active on social media like Instagram and Twitter. Chhetri keeps updating the fans about the matches updates. Likewise, he spost about his family, vacations. Chhetri uploads pictures with his wife, cars, and family on his social media accounts.