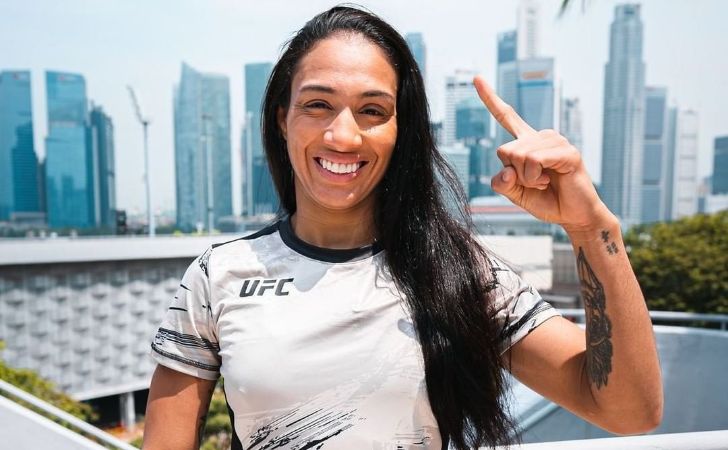 On June 12, 2022, Santos fought for the UFC Women’s Flyweight Championship. Her opponent was one of the most dangerous women fighters, Valentina Shevchenko.

This was an even matchup, and both fighters fought their best. The fight went for the judge’s score card, and Shevchenko won the fight via split decision.  She is one time Aspera FC Bantamweight Champion. She won the championship on August 13, 2016, against Laisa Coimbra.

So, if you like Taila Santos and want to learn more about her, please read the article below.

Taila Santos was born on 22 June 1993 in Jaragua do Sul, Brazil. She grew up and spent her teenage on Brazil. Her family information is currently under review and will be updated as soon as possible.

Her father was Muay Thai coach, and she started training at 16. Later, she won the championship at Chute Boxe of Curitiba. She then started training in Jiu-Jitsu, and her father organized an MMA fight which she won.

These are the available information about her early life; more will be updated as soon as possible.

There is not much information about Santos’s education at the moment. However, some reports suggested that she attended her local school in her hometown.

MMA fighter Taila Santos was born on June 22, 1993, and is currently 28. Santos is five ft. 6 in (1.68 m) tall and weighs around 125 lbs. or 57 kg. Santos’s body measurements and shoe size are currently under review and will be updated as soon as possible. Santos has black hair, and her eyes are dark brown. Santos’s zodiac sign is under review.

On February 2, 2019, Santos made her UFC debut against Mara Romero Borella. Unfortunately, she lost the fight via split decision. This was her first MMA loss.

On November 20, 2021, Santos fought against Joanne Wood. Santos submitted Wood via rear-naked choke in the first round.

On June 12, 2022, Santos lost her second MMA against Valentina Shevchenko at UFC 275. They fought for the UFC Women’s Flyweight Championship. Santos lost the fight via split decision. This fight showed how tough and great of a fighter Santos is. She became the first fighter to win on a judge’s scorecard against Shevchenko in the flyweight division. She will surely get a chance for the title shot soon.

Who is Taila Santos husband?

Taila Santos is married to her long love Pedro Saude. They have been married for seven years and have a child together. Her daughter’s name is Gloria.

Pedro Saude is also a fight lover, fitness specialist, and bodybuilder. Pedro is also a businessman and has a business under the name 33thc.  This is the available information about her husband; more information will be updated as soon as possible.

Santos’s net worth is estimated to be $1-$2 million as of 2022. Santos earned $98,500 for her fight against Joanne Wood. Her highest earning from a fight came against Valentina Shevchenko, which was around $450,000.

Her base salary is around $60,000. However, after good fights, her base salary will be incremented. After bonuses and sponsorships, she earns about $200,000-$400,000 a fight. Santos makes most of her money not just from fighting in the Octagon but also through lucrative sponsorship deals and advertisements.