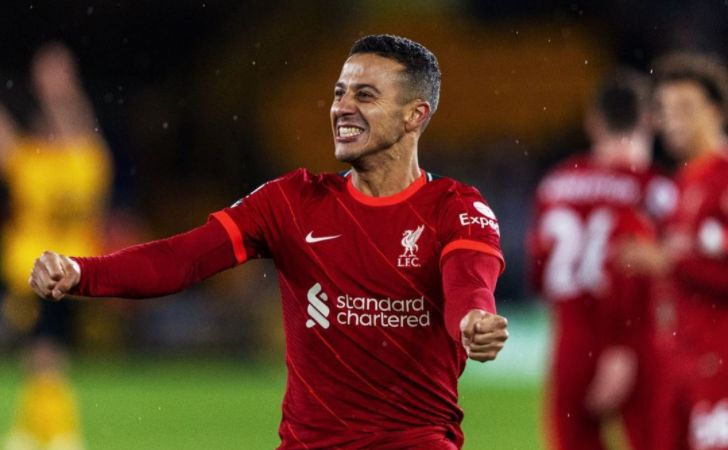 The two-time UEFA champions’ league winner Thiago Alcantara is one of the best Central midfielders in modern football. The Spanish midfield maestro plays for football club Liverpool after his transfer from FC Bayern Munich in September 2020. He has played in many major tournaments with clubs like FC Barcelona and FC Bayern Munich.

Footballer Thiago is a very versatile player who can play excellently even as the central attacking midfielder, winger position, and mainly as the central midfielder. Thiago has scored a lot of goals and assisted his teammates in major competitions like the UEFA champions’ league and the international games. Footballer Thiago has played for his national team for a long time, earning his 46 caps to date after his debut in 2011.

Similarly, he has won many major trophies in his career, like the Spanish league title La Liga and the UEFA champions’ league. Footballer Thiago is widely regarded as one of the finest midfielders of the game due to his intelligence, passing skills, shooting skills.

Spanish international Thiago Alcantara was born to ex-footballer father Lomar do Nascimento Mazinho and mother Valeria Alcantara. Footballer Alcantara was born in a rich family in a place in Italy called San Pietro Vernotico. Thiago’s father was in the world cup winning team of the Brazilian national team in 1994.

Likewise, he also has one brother and one sister whose names are Rafinha Alcantara and Thaisa Alcantara. His brother is also a professional football player and plays for the French football club PSG. Showing good signs at the early stage, he grew up playing football with his brother and friends. According to his parents, he would often play in the ground with his school friends during his early childhood.

The talented child was soon recruited in the ranks of the Brazilian football club Flamengo, and in early 2008 he joined the Spanish football club Barcelona before finally moving to FC Bayern Munich four seasons later. He played with number 6 on his jersey during his days at FC Bayern Munich, who currently wears the same number 6 at his present club Liverpool. Likewise, he uses Thiago as his name in his club as well as his national team kit during his career. Starting as a central midfielder in his early days, he excelled at many midfield positions.

Spanish international Thiago Alcantara was born on 11-04-1991, making him 30 years old. (As per 2021) He follows Christian as the religion, and his Zodiac (horoscope) sign is Aries. According to his father, he played football with the children in their neighborhood. Delighted by his talent, his father took him to FC Flamengo in Brazil, who was soon recruited in the youth academy of FC Barcelona. Since then, he has been playing at a high level, making him one of the best players in modern Football.

Thiago has an athletic body, and he stands 5.9 inches tall. He has evenly matched weight for a professional footballer, as he weighs around 156 pounds (71 kilograms) at normal. Thiago has dark brown color eyes and black color hair. He is very professional and takes very care of his body, training, and diet. He has a chest span of 38 inches and a waist of 30 inches. Likewise, his athletic biceps measure 13 inches. Likewise, he uses a shoe size of 11 (US).

Thiago Alcantara’s salary and net worth

As per multiple reports, Thiago Alcantara is believed to be worth around 25 million dollars to date. He has played different clubs like FC Barcelona, FC Bayern Munich and Liverpool, so a major part of his earnings constitutes Football Club salary and additional bonuses, endorsement, and sponsorship deals. Alcantara made 46 appearances for his national team after his debut in 2011.

He has also earned a significant salary playing for his national team. FC Barcelona signed him at an early age for a junior team where he earned a signing bonus and salary according to his contract. Likewise, he was again signed by German club FC Bayern Munich in a 28 million dollar deal, where he played for seven seasons. He earns around 12 million dollars per season at his present club Liverpool.

This amount makes him one of the highest-paid players in modern Football. He also owns multiple extraordinary cars in his collection, such as Mercedes and Audi.

Spanish International Thiago Alcantara follows Christian religion, and his Zodiac sign is Aries. He is married to his girlfriend, whom he has known for a long time. Her name is Julia Vigas.

She is a professional model and has huge followings on her social media. The couple fell in love with each other during his Bayern Munich days. They are parents to one son Gabriel Alcantara and a daughter, whose name is Siena Alcantara. He has a huge following on Instagram, Facebook, and Twitter.

He has an athletic body and is a former professional football player, and he also spends his significant time in the gym and training. He takes very care of his body, training, and diet, making him one of the remarkable professionals in this sport.

Thiago Alcantara is one of the intelligent and versatile Football having beautiful trophy collections throughout his career. His vision, passing, and dribbling qualities make him one of the best midfielders in Football. He has excellent dribbling and passing skills. Thiago is also very good at crossing and passing the ball, making changes for the strikers and defenders to head the ball into the net.

He has won several major trophies like the Spanish league title, German league title, and the UEFA champions’ league in his career, playing many big football clubs. In his professional football career, he has played mostly as a central midfielder, central attacking midfielder, and sometimes as a Left and Right midfielder. He is famous as an excellent dribbler and visionary player in Football.

Thiago Alcantara is also quite active on social media like Instagram and Twitter. He keeps updating the fans about the matches and, his announcements. Thiago posts pictures of his vacations in different places, family, and his teammates, earning him huge fan followings around the world. He uploads pictures with his cars, watches, and children on his social media.

Spanish international Thiago Alcantara has an overall rating of 86 in the FIFA 22 game. His rating has slightly increased from that of FIFA 21. Being a midfielder, he has the highest passing and dribbling out of other attributes. He has the highest 90 for dribbling and the lowest 63 for pace. His individual FIFA 22 rating for different attributes are: