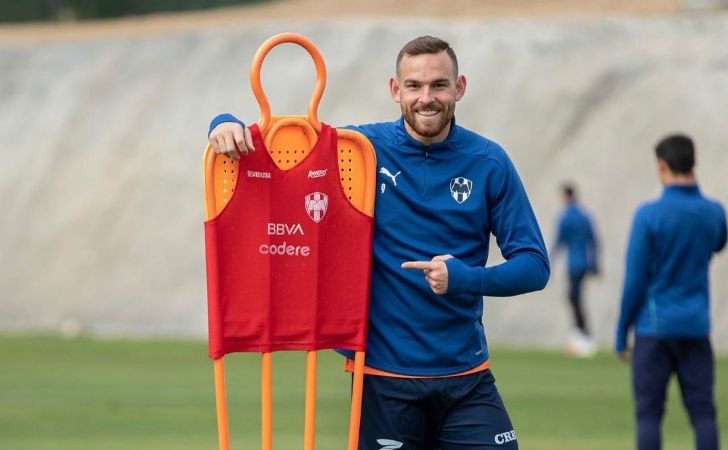 Furthermore, Janssen is a talented and experienced footballer who plays as a forward for both teams. The 28-year-old Netherlands forward’s great strength as a striker is his ability to adapt to any situation and make things work for himself.

Moving further, the Dutch striker, Janssen was brought to this world on 15th June, 1994 in Heesch, Netherlands. Thus, he is currently 28 years old.

Furthermore, he was born to his mother Annemarie Verstappen, a former world champion swimmer and Dutch Sportswoman of the year. However, there is not much information regarding his father, but it will be updated soon.

Moreover, Janssen grew up with his brother, Jan but unfortunately, when Vincent was six years old, Jan died due to leukemia.

Further, Vincent enjoyed playing football daily with his friends and began his journey with the academy team SV TOP before being signed by the local professional club TOP.

However, there is not much information regarding his schooling, but it will be updated soon.

Moving further, this Dutch striker has an outstanding physique. In terms of height, he stands at 6 feet 0 inches tall and weighs approximately 88 kg or 194 lbs.

Similarly, Janssen has an athletic physical appearance. In addition, his hair is light brown, and his eyes are brown.

However, Janssen’s Zodiac Sign is Gemini, which indicates he is intelligent, adaptable, and outgoing. When a Gemini person is around, there is never a dull moment.

Additionally, Janssen seems to be of Dutch nationality.

Moving further, Janssen started playing football at a very young age. He decided to join SV TOP in 2000, a youth academy Branch of TOP. Afterward, Vincent became part of the youth academy of the professional branch of the club TOP and remained with the club until 2006.

Subsequently, in 2006, he became a NEC academy member once the TOP and NEC academies consolidated.

Later, the Dutch striker was transferred from NEC to Feyenoord youth teams in 2009, where he won the U19s national title in 2013. He stayed with the club till 2013.

Moving on, while getting released by Feyenoord, Janssen chose to join Eerste Divisie club Almere City on a free transfer on 1st July, 2013. However, the Dutch forward made his first appearance for the club on 3rd August 2013 in a 3–2 loss against Volendam.

Moving further, Janssen signed an agreement with Eredivisie side AZ Alkmaar on 1st July 2015, for €500Thousand until 2019. On July 30, 2015, he netted his first official goal for the squad against Istanbul Başakşehir in a UEFA Europa League qualifier.

However, Vincent’s first hat-trick for the club occurred against his former team Feyenoord in a 4–2 victory. On April 16, 2016, he also netted four goals in a 5–1 glorious victory over PEC Zwolle.

Also, he received the Johan Cruyff Award, the Dutch “Talent of the Year,” in 2016.

In his 49 match appearances for the club, Janssen scored 32 goals with 7 assists.

As a result, he thus became Eredivisie’s top goal scorer and the youngest player to tally over 25 goals in an Eredivisie league after Ronaldo Nazario.

On 12th July, 2016, Janssen was signed by Premier League club, Tottenham Hotspur on a four-year contract for an estimated amount of 20 million euros. Upon this deal, Vincent became AZ Alkmaar’s most expensive player transferred in the club’s history.

Further, the Dutch striker makes his first appearance for Premier League on August 13th, substituting Eric Dier against Everton. However, he made it to starting XI the following week against Crystal Palace, playing for 90 minutes as a striker.

Furthermore, Vincent scored his first goal for the club on 21st September, 2016, netting a penalty in a 5-0 EFL Cup victory over Gillingham.

In his 42 match appearances for the club, Janssen scored 6 goals with 4 assists.

Moving further, on 8th September, 2017, Janssen was sent out on loan to join Super Lig club Fenerbahce on a season-long loan till 30th June, 2018.

Further, on his debut in Turkey, Janssen scored his first goal for the squad in a 4–1 victory over Alanyaspor. However, he was wounded against Bursaspor in early December, and unfortunately was out for several months.

In addition, Janssen returned to Tottenham when his loan period ended in the summer of 2018.

Overall, in his 18 appearances for the club, Janssen managed to score 5 goals and 4 assists.

Moreover, on 17th August, Vincent made his first appearance as a substitute in a 2-0 win over Toluca. A week later he scored his first goal in Mexican football against Santos Laguna.

Eventually, on 5th November, he scored his first hat-trick for the team against Chiapas in a Copa MX group stage encounter.

Further, the Dutch striker showed to be an important club member by assisting the team in winning the Apertura 2019 finals over America. Though, arriving as a substitute in the second leg, Janssen scored a penalty goal as Monterrey claimed their first league title since 2010.

Altogether, Janssen scored 24 goals and assisted 5 times in 94 games for the club.

The Dutch striker signed a 4-year contract with Royal Antwerp at a reported fee of 5.50 million euros. He will be joining the club on 1st July 2022.

Before making his senior international debut, Vincent Janssen had represented the Netherlands in under-15, under-16, under-18, under-20, and under-21 championships.

However, Janssen gained his maiden call-up to the Netherlands senior team in March 2016, for a friendly match against France and England. He made his first appearance for the senior team on 25th March, 2016.

Furthermore, on 29th March, 2016, Janssen netted his first international goal in a 2–1 victory over England, where he also provided an assist.

Overall, in his 18 appearances for the Netherlands senior team, Janssen managed to score 7 goals.

Is Vincent Janssen Married? Does he have Children?

Currently, Vincent Janssen is a married man. He recently got married to his gorgeous wife Talia. However, the couple tied the knot on 4th June, 2022 in Santa Barbara, California.

The Dutch striker recently shared pictures of their marriage ceremony on Instagram. Furthermore, Vincent doesn’t have any children yet, but he will make the announcement shortly. However, regarding Vincent Janssen’s sexual orientation, he is straight.

Moving further, Vincent Janssen is a right-footed player, however, he scores with his left foot also, and is not hampered by any degree of one-footedness.

Furthermore, Janssen is known for his finishing, mobility, and pace. He is an outstanding hold-up player because of his power, and as a strong distributor of the ball, he often prepares goal-scoring chances for teammates.

Additionally, he is also noted for his strong work and competitive spirit. Janssen’s playing style has drawn similarities to Ruud van Nistelrooy.

Despite his evident strengths, Vincent Janssen has certain flaws as a player. His deficiencies include strikes outside the penalty area, movement timing, and close control.

Moving Further, Vincent Janssen has a FIFA 22 overall rating of 73. Meanwhile, his potential rating is also 73, and his best position on the field is ST (Striker).

What is the Net Worth of Vincent Janssen?

In 2019, the Dutch striker reached an agreement with Monterrey on a contract worth approximately £1,716,000 per year.

As a result, The Dutch international’s weekly wage stands at £33,000. However, his current contract expires on 30th June, 2024.

In addition, the Dutch striker posts about the matches, family, and endorses brands through social media.

The Dutch international Janssen plays as a striker for Royal Antwerp.

Vincent Janssen is of Dutch nationality.