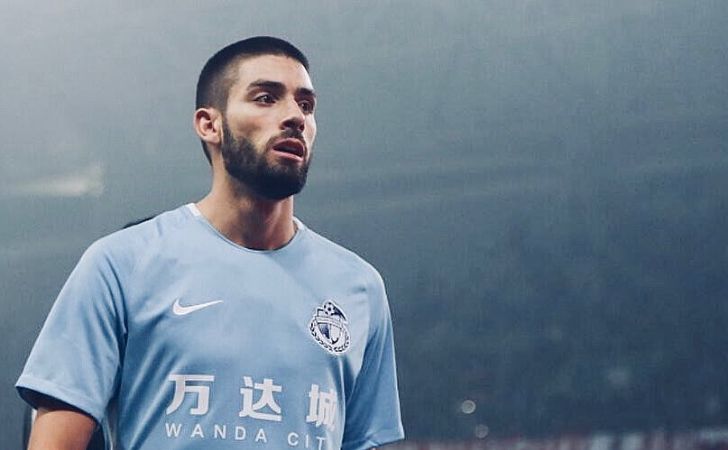 Currently, Yannick plays as a midfielder and left winger at Atletico Madrid, and he wears jersey number 21.

First and foremost, Yannick’s close control and dribbling skills are his most noticeable strengths. By just sprinting at the defense with the ball, he can exploit spaces and create danger for the opponents.

Carrasco’s pace on the counterattack and ability to switch both flanks provide Atletico with flexibility. Perhaps, Carrasco is one of Atletico’s most talented players, and he improves as he gains experience.

Yan was born on 4th September, 1993 in Ixelles, which is a Municipality located in Belgium. He was born to a Portuguese father and a Spanish mother, Carmen Carassco.

However, Carrasco’s father abandoned them when Yannick was still a child, leaving her mother, Carmen, to raise Yannick and his younger brother Mylan Ferreira Carassco. He even has two younger half-siblings, Ciela, and Hugo.

Moreover, Yannick used to play football with his brother and friends when he was a kid. That’s when he became interested and committed to football.

Moving further, Yannick is often seen in a simple haircut, not a very quirky one. Likewise, his hair color is black, and he has dark brown eyes.

Moreover, Carrasco’s zodiac sign is Virgo which entails that he is loyal, analytical, thoughtful, hardworking, and practical. Moreover, his chest measurement is 42 inches, his biceps is 14 inches, and his waist size is 30 inches.

In 1999, this Belgian winger started his football career at Stade Everios Racing Club, which is a football club situated in Belgium.

Yan played there for 1 year and joined Diegem Sports (Belgian association football club) in 2000 and stayed there till 2005.

At the age of 11, Yannick moved to Brussels to pursue his football career after five years with Diegem Sports.

He joined KRC Genk in 2005 and quickly rose to prominence due to his exceptional talent.

Furthermore, after witnessing Yannick’s incredible football skills, Monaco signed him in 2010. He spent two years with the B team before being promoted to the senior team in 2012.

For the Monaco B team, Yan scored 10 goals over his 30 appearances.

Carrasco made his professional debut for Monaco during the first game of the Ligue 2 against Tours in July 2012. He managed to score a freekick goal and ultimately led the team to victory.

In his first season with the club, he appeared in 27 games and scored six goals as Monaco regained their place in Ligue 1.

On 20th December, 2013, Carassco scored a brace within 10 minutes against Sochaux.

Later in the game, the score was equalized at 2-2, and Monaco missed the chance to reclaim first place in Ligue 1. However, Monaco secured the second position in the Ligue 1 behind Paris Saint-German.

Overall, Yannick managed to score 15 goals for Monaco in his 120 appearances.

On 10th July, 2015, Atletico Madrid added a new attacking option with the signing of Belgium winger Yannick Carrasco from Monaco. He agreed to a five-year contract worth 20 million euros.

Eventually, Yannick managed to score his first goal for Atletico Madrid in a 2-0 comfortable win over Real Sociedad in October 2015.

Further, Yannick scored Atlético’s 79th-minute equalizer against Real Madrid in the 2016 UEFA Champions League Final at the San Siro. Unfortunately, his team lost the league in the penalty shootout.

On the other hand, Yannick became the first Belgian to score in a European Cup final.

Lastly, during these 3 years at Atletico, Yannick netted 15 goals in his 96 appearances.

However, he scored his first goal for the club in his fourth match, a 1–1 away draw with Henan Jianye on 31st March 2018, ending his club’s losing streak.

In total, Carrasco scored 24 goals in his 52 appearances.

On 31st January, 2020, Atlético Madrid re-signed the Belgian winger on loan from the Chinese club Dalian Professional until the end of the season.

However, Carrasco was signed permanently by Atletico Madrid on a four-year contract on 8th September, 2020.

Moreover, in November 2020, this Belgian winger scored the game-winning goal in a 1–0 win over Barcelona.

In conclusion, Carrasco has managed to score 37 goals and assisted 24 times in his 219 appearances for Atletico Madrid.

Carrasco represented Belgium national team at different age levels such as Under-15, Under-17, Under-18, Under-19, and Under-21.

However, Yannick made his professional international debut for Belgium National Team in March 2015. He entered as a substitute in a 5-0 win over Cyprus in UEFA Euro 2016 qualification.

Yannick scored his first international goal for Belgium National team on 26th June, 2016, and concluded with a 4-0 win over Hungary.

Moreover, The Belgian winger was also included in the Belgium squad in the 2018 FIFA World Cup by Roberto Martinez (manager of the Belgium National Team).

However, the Belgium team finished third in the 2018 FIFA World Cup, held in Russia.

Who is Yannick Carrasco Wife? Does he have children?

In June 2017, the 28-year-old Belgian winger married his long-term girlfriend, the glamorous former Miss Belgium, Noemie Happart. The couple started dating in 2015 and have been together for around 8 years.

Undoubtedly, the kiss that Yannick planted on his beloved girlfriend after scoring the equalizer against Real Madrid in the UEFA Champions League final, is happily ensconced in the memory of every football fan.

However, Yannick does not have any children till now.

Further, his sexual orientation is straight.

The Belgian winger, Yannick has an overall rating of 84 in FIFA 22 as well as a potential of 84. Further, Yannick has got a 4-star rating for his skills and a 4-star for his weak foot.

The Belgian winger wears the jersey number 11 for Belgium National Team and 21 for Atletico Madrid.

What is the Net Worth of Yannick Carrasco?

The Belgian winger signed a contract with Atletico Madrid in September 2020 with an annual salary of 4.5 million euros (3.8 million pounds) per year.

This implies that this 28-year-old player has an estimated net worth of 15 million euros (12.8 million pounds).

Carrasco connects and socializes with his followers on various social media platforms. He generally posts about the match, family, vacations, his achievements, and he also endorses brands through social media.