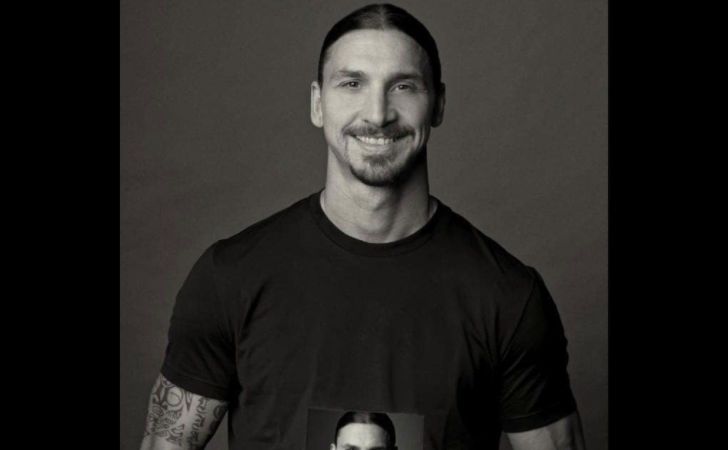 Nicknamed as” Ibra” by football pundits, Zlatan Ibrahimovic is one of the most athletic and lethal strikers. Swedish footballer Ibrahimovic currently plays for Italian football club AC Milan, after his transfer from the LA Galaxy football club in 2020. He has played for many Elite European football clubs like FC Barcelona, Inter Milan, PSG, Juventus, Manchester United, and AC Milan. Zlatan is a versatile player who can play excellently even as the winger, but his favorite position is central forward and striker. He has also played for his national team Sweden for a long time, earning his 120 Caps until his debut in 2001.

Currently leading his team AC Milan, Zlatan himself says he feels like a young footballer even at 40. Playing for many football clubs, he has won many major trophies like the UEFA Europa League, a Spanish league title and the Italian league title playing for different European clubs. The prolific Swedish striker is widely regarded as one of the best footballers of this generation due to his shooting ability, leadership quality, and aggressiveness during the game. This biography on Swedish football star Zlatan Ibrahimovic covers some of the important moments from his early life till date.

Ibrahimovic didn’t have an easy childhood as his mother was divorced and he had to live with his father. His father was not rich enough to buy his football boots and jerseys, so he was determined to become a successful footballer from a young age. Zlatan initially got into a junior team of local football club Malmo FF where he even impressed the coach. He even thought of quitting football to do a job to earn money. However, he continued his football journey, and now he has established himself as one of the best football players in his position.

Italian league title winner Swedish footballer was born on 03-10-1981, making him 40 years old. (As per 2022) He is a Muslim Bosniak by religion and his Zodiac (horoscope) sign is Libra. He is also a tattoo fan and has multiple tattoos on different body parts. Zlatan is very strong footballer and he is admired for his leadership quality in a match. Zlatan himself says he feels like a young footballer even at 40. Even at this age he has been playing at a high level, making him one of the best players in this sport.

Zlatan has an athletic and physically fit body and he stands 6.5 feet tall. Footballer Zlatan has evenly matched weight for a professional footballer, as he weighs around 209 pounds (95 kilograms) at normal. He has black color eyes and black color hair. Zlatan has distinct long hair and he usually makes a ponytail. This handsome footballer is very professional and takes very care of his body, training, and diet. Zlatan has a chest span of 43 inches and a waist of 35 inches. Likewise, his athletic biceps measure 15 inches, and he uses a shoe size of 13 (US).

Zlatan Ibrahimovic Salary and Net worth

The Swedish international footballer is worth around 90 million dollars to date. He has played different clubs like Inter Milan, PSG, Juventus, and AC Milan, so a major part of his earnings constitutes Football Club salary and additional bonuses, endorsement, and sponsorship deals. He made 120 appearances for his national team Sweden after his debut in 2001.

Zlatan has also earned a significant salary playing for his national team. Ajax signed him in a 9 million dollar deal, where he earned a signing bonus and salary according to his contract while he was very young. Likewise, he was again signed by multiple European football clubs like FC Barcelona, Manchester United and Juventus. He earns around 8 million dollars per season at his present club AC Milan. This net worth and amount makes him one of the highest-paid players in modern football. Zlatan also owns multiple extraordinary cars in his collection, such as Ferrari and Lamborghini.

Who is Zlatan Ibrahimovic Wife ?

Zlatan Ibrahimovic is married to his girlfriend, whom he had known for a long time. Her name is Helena Seger and she is also from Sweden. Seger is a model by profession, and she has huge fan followings around the world. The beautiful couple fell in love with each other while playing for Dutch football club Ajax. The couple got married in 2001, and they have been inseparable ever since.

They are parents to two sons, Maximilian Ibrahimovic and Vincent Ibrahimovic. Similarly, he has a huge following on Instagram, Facebook, and Twitter. Zlatan has an athletic body and being a professional football player, he spends his significant time in the gym and training even at the age of 40. Footballer Zlatan is also a martial art fan and he loves sports like taekwondo and Karate.

The FIFA Puskas award winner striker is one of the best finishers in this sport has ever seen. He is an intelligent and leading footballer having beautiful trophy collections playing for many European football clubs. His finishing, shooting skills, and ball heading ability make him one of the best football strikers. He can play excellently as the central forward and the striker according to the team’s needs.

Zlatan has excellent shooting skills from the inside and outside the box. His outstanding finishing ability has helped him score many goals in the international and club tournaments. During the counter-attack, he is also very good on one vs one situations against the opposition goalkeepers. He has played mostly as the striker and central forward and sometimes as a winger in his professional football career.

Zlatan Ibrahimovic is also quite active on social media like Instagram and Twitter. In addition, he keeps updating the fans about the matches and his announcements. Zlatan posts pictures of his vacations in different places, family, and his teammates, earning him huge fan followings worldwide. He uploads pictures with his cars, watches and children on social media.